Just added to your cart

Our All-Natural Holistic Solutions have been helping pets for over 20 years.

Our All-Natural Holistic Solutions have been helping pets for over 20 years.

Guide to the Galaxy!

We've got all of the cat resources and videos you need to help your cat's well-being. COVID-19 & Cats – Keeping You and Your Animal Companions Safe

As the COVID-19 pandemic continues to unfold, developments break that can be confusing – and sometimes unsettling. How Often Should I Bathe my Cat?

Since it’s pretty well-established that dogs need to be bathed regularly, it is usually presumed that cats do, as well. But the truth is, there is simply no reason to bathe your cat. Should You Leash Walk Your Cat?

The short answer is, yes—I’m all for leash-walking your cat, presuming that we have a thumbs-up from the most important family member: the cat actually wants to go for a walk! One of the things we forget about  cats, and animals in general, is that they are energetic sponges – they absorb all of the energy that humans put out in their homes. "“My philosophy around behavior modification especially things like scratching furniture, has always been very simple: behind every no, there must be a yes." In a recent scientific study, only 60% of cats reacted to catnip, while 90% had a noticeable reaction to silver vine. Allow us to introduce you – and your cat – to 4 catnip alternatives from Space Kitty Express!

Let customers speak for us

It has been 7 days, and my little one hasn't calmed down a bit. In fact she has been getting up earlier. :( We went from her starting at 4:30 am to now 3am. HELP!! She intentionally acts out until we get out of bed and the lights come on. Until then, she won't stop for anything. Clawing the underside of the bed, trying to climb curtains, pouncing at every move, pulling at the cords to the clock/lamp etc. I have tried putting drops on her food, in her water, and even tried massaging into her fur. She is 8 months old and SOOO wild. I bought 4 different solutions. I have many cats with many different problems. After buying many other products and chasing different cats around trying to use solutions, I picked the safe space and put it in their water. It is working on all their problems. So easy and I am so happy. After 1 day the pee-ers are stopping, the bullies are calming and the scardy cats are coming out. 1 day! There is more to be done and I will stock up and keep putting in their water. Stock up people, this stuff works.

I recently adopted a 1 year old who’s previous owners never played with him. I’ve bought tons of toys trying to find what gets him going. Ordered this one as a last shot before saying he just isn’t that playful. Pulled it out of the box and I could see his interest. Happy to say for the past few hours he’s ran more and played more then if ever seen! Definitely recommend! So much fun, the sound of the feathers flying through the air drive him nuts! So glad we get to bond through playtime now! Thank you so much 🖤 This was the fourth type of harness I tried. Finally, a great design! My cat was comfortable and safe.
Only one CHANGE needed,
The sizing increments need to be 1” instead of 2”.
I bought an (XS) for my kitten and then I bought the (S) as he grew.
There was too much of a size difference at the Velcro closure.
The (XS) was too tight but the (S) was too big around the chest closure.
Add more Velcro or increment size by 1”, not 2”.
Other than sizing, it’s a GREAT HARNESS!

My maine coon Shadow and his smaller brother Georgie both love this bed. Im so glad I made the investment.

Whisker+Box Large - The Penelope Box
Just Wow. It got my fat elderly cat up and moving.

Ok, the price point is high for a cat toy, but based on how ALL my cats reacted, it's so worth it.

My 15 yr old played for the first time in 3 years, and he's fat, so he needs it. (We've been trying to make him play, but nothing has interested him until now. Timed feeding with high protein, low carb wet food for the last year, don't yell at me Jackson)

My 14 yr old went after it with the same enthusiasm she has when she hunts the hornets that get into the house...she's not very bright.

And my diabetic cat in remission ( 1 month off the juice, yay! Never over weight) was playing like a kitten again. She's 12.

Take that into consideration with the space saving and the fact that when my pica cat eventually demolishes the feathers, I can just put new ones on the wand, I'm not regretting the extra money. Honestly, I'm probably going to buy a second one for the second level of the house so we don't lose it.

I'm in love, my cats are in love. What more can I say?

I love this tee shirt, great quality, good fit and cute design. It always makes peaple smile when they see it. Highly recommended. We added a new kitten to our clowder at the beginning of November. 2 of our older cats pretty much ignored him after the first week. Mimi, (the youngest of the 3 older cats) wasn't having any of it and would charge at the kitty playpen whenever he was in it or try to attack if he was out in the open. Today, after about 2 weeks of using the Bully formula in water dishes and on all of Mimi's favorite napping spots, she let him walk within 4 feet of her, and even play with toys near her.

Bully Solution
This is the best toy

I know toys can have individual reactions to a particular toy! Both of my cats love this prey toy. I've tried lots of different kinds of litter in my search to be more environmentally friendly. The best options for the environment weren't so good for me. I hated scooping the box. Thankfully, my cat has endured all of the changes and been content. When we tried sustainably yours, everyone in the house loved it immediately, my cat more than anyone. He always used his litterbox, but not like this. He will go in just to dig around for fun now. With previous litters, he would get a lot of dust in his eyes and nose and be sneezing all the time. My allergies would be set off from scooping the box. Now I can scoop with no problems, and I don't worry about my cat's respiratory health. We never notice any smell. We live in a small space, so the litter box is right next to the couch, but the smell never bothers us one bit. The only bad thing about it is that it does track, though my cat is partly to blame for that. He enjoys darting out of his litterbox like a maniac. The small amount of tracking (which has been a problem for most litters we've tried) is a very small price to pay for all of the other benefits. The product is worth the price. Bought size xs according to your chart. Too small, doesn't even reach around. No refuns/exchanges. Never thought Jackson Galaxy would support this. DON'T BUY!!!!

I wish you write it as age related sizes .. it would be better and easier for the buyers to get thr correct size
I did not buy it because i am afriad of size issue

My Fluffy Chonky Void is very picky when it comes to toys so when his aunt got my boys this for Christmas, I thought my skinny boi would go crazy over it but Jaspurr, would not play with it because he isn't very active. Boy was I wrong. This toy brought out the slinky boi in chonky void. He leaps and bounds in ways I have never seen him move while interacting with this toy. I will definitely be purchasing more products by Jackson Galaxy in the future.

I adopted my 5th cat, Reyna in February 2019. My two males and one female gang up on her constantly, with my male, Sawyer, being the worst. They would fight, to the point of drawing blood, weekly. I have tried so many calming products and they either didn’t work or effects didn’t last. I’ve been using the Bully Solution for 3 weeks now and not one fight!! Sawyer has been so much better with Reyna. The others have stopped hanging up on her. 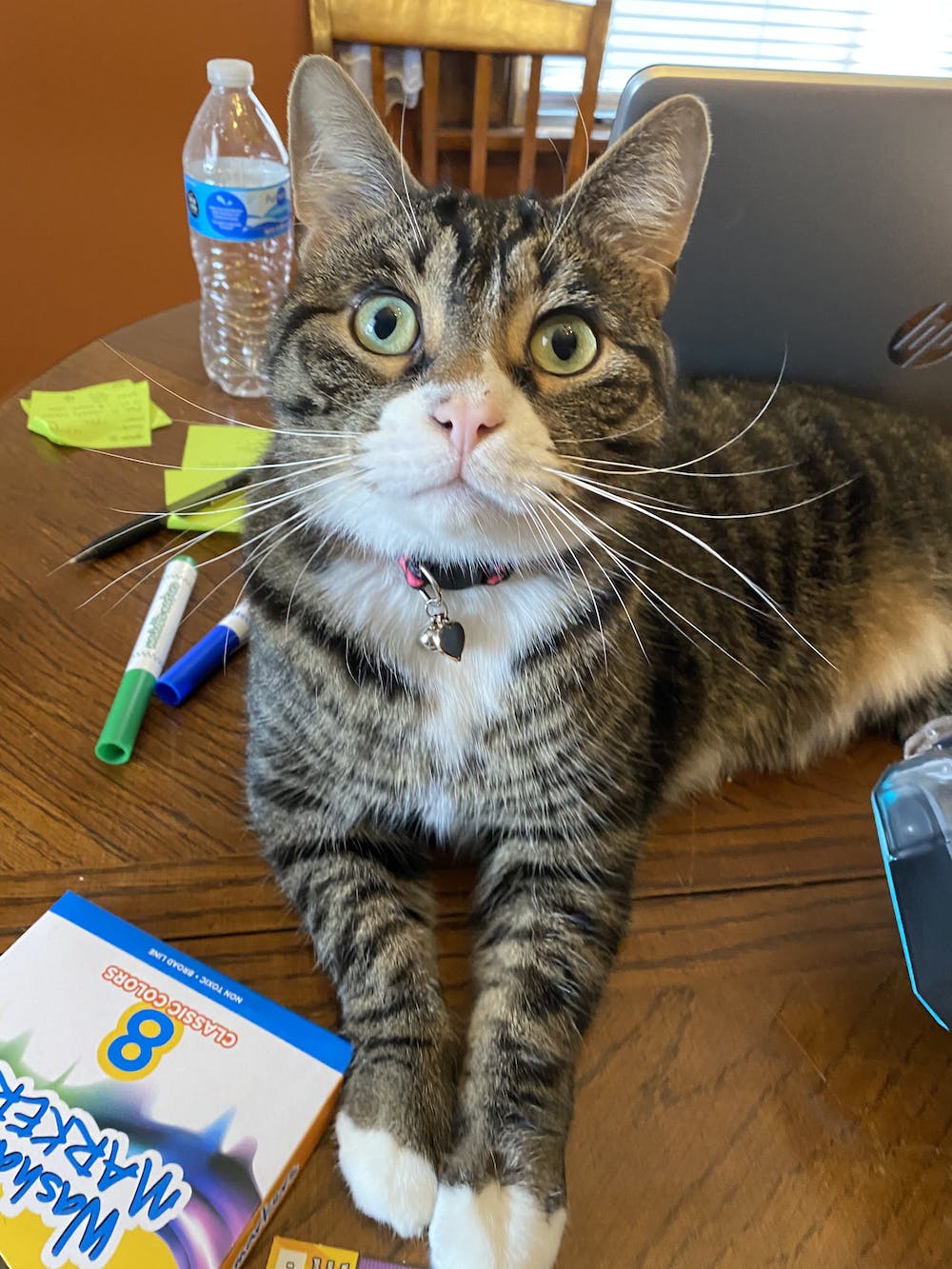 Bully Solution
Everything in this Bundle Works!

I ordered this Bundle for my newly adopted cat. She's 1 year old and still has some kitten energy left in her. She likes the Sustainably Yours Cat Litter. She tried it out for the first time and was digging with youthful enthusiasm! It's really soft on paws but clumps very hard. Even with that high energy digging, nothing spilled over the box edge. I didn't even use the rim. She's tiny and doesn't need it. The litter scoop has a long curved handle which is super comfortable to use. Because my cat was new, and didn't know her way around yet, she had a little newbie "oops." Also, she threw up after eating too fast. So I used the cleaner. It's the best cleaner I've *ever* used. It is a total game changer. All pee and puke was completely removed and no odor left behind. My (beige) carpet was not perfumed, it was cleaned and good as new.
I use Natural Solutions and bc my cat is in her brand new home, I use Safe Space to help her as she gets more comfortable here. It makes a big difference. I love every piece of this Bundle. It all works, very, very well. Highly recommend, every piece is good quality and works.